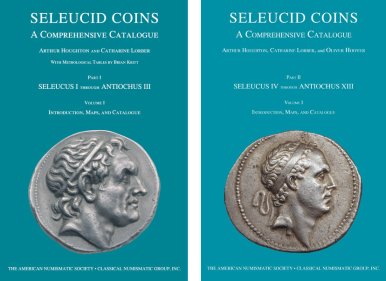 In 2002 and 2008 the American Numismatic Society and Classical Numismatic Group published the two parts of Seleucid Coins: A Comprehensive Catalogue, by Arthur Houghton, Catharine Lorber, and Oliver Hoover. The first part, by Houghton and Lorber, presented and interpreted all the  numismatic material for Seleucus I to Antiochus III known up to 2002. The second part, by Houghton, Lorber, and Hoover, did the same for the Seleucid kings from Seleucus IV to  Antiochus XIII. In total, more than 2,491 primary coin types were published in these volumes.

No sooner had these important books come out in print than new types and varieties began to appear at the rate of almost 100 a year. This rapid growth of material made necessary the development of a system that could keep up with the coins. The Seleucid Coins Addenda System (SCADS) is intended to provide online access to the new material that has appeared since 2008. As there is no indication that the flow of previously unrecorded types and varieties will stop anytime soon, it is expected that the SCADS database will continue to grow over time. Interested parties will be instantly notified of new additions to the database by alerts through RSS feed (accessed through the subscribe button on the upper right of this page) and direct email subscription (accessed through the follow button on the sidebar).

The coins in the SCADS database are categorized by mint and ruler, making it easy for users to find all new entries for a particular king or mint with a single click. Extensive tagging of entry content allows for full searchability. Thus, for example, a user interested in all new material depicting Apollo would simply enter “Apollo” as the search criterion and SCADS would provide all the relevant entries. If a user was interested only in Apollo on issues of bronze denomination C, “denomination C” could be added to narrow down the search. The coins in the database have all been given a unique catalogue number (SCADS1, SCADS2, SCADS3, etc.) for ease of reference, but these only reflect the order of entry and are not tied to the numbering system used in the Seleucid Coins volumes.

The weblog (blog) format makes SCADS a unique tool in that it allows the community of users to annotate records. For example, a user who owns a second example of a coin in the database might leave a comment indicating the existence of the additional specimen. Likewise, another user might leave some insight about a coin. In this way, not only does SCADS present the new coins, but it offers opportunity for continued discussion within the Seleucid numismatic community. SCADS is designed to allow necessary changes or improvements to entries and to allow the insertion of new material that may appear. Users are encouraged to comment on individual entries or suggest additions or changes they believe would add to the content of the SCADS website.

This site is maintained by Oliver D. Hoover, a co-author of Seleucid Coins, Part II, and a widely published scholar on various aspects of Seleucid numismatics, chronology, and history.  Hoover is currently an Adjunct Curator of the American Numismatic Society and Managing Editor of the American Journal of Numismatics. He is also the author behind Classical Numismatic Group’s ongoing Handbook of Greek Coinage series.

The entries included in SCADS would not have been possible without the contribution of numerous individuals — curators of collections, scholars, collectors, members of the trade, and others with technical or other expertise. For their contributions to the content of SCADS, we wish to cite in particular the help of Morten Andersen, Donald Ariel, G. R. F. Assar, Osmund Bopearachchi, Bradley Bowlin, Frédérique Duyrat, François de Callataÿ, Edward Cohen, Frédérique Duyrat, Wolfgang Fischer-Bossert, Haim Gitler, Jay Guberman, Panagiotis Iossif, Mary Lannin, John Lavender, Catharine Lorber, Laure Marest-Caffey, Andrew Meadows, Tom Miller, Brad Nelson, Ziad Sawaya, Shanna Schmidt, Elena Stolyarik, Danny Syon, Lloyd Taylor, Petr Vesely, Georges Voulgaridis, and Nicholas Wright. We are especially grateful to Ute Wartenberg Kagan, who has been a source of great encouragement and advice and who has always made the Seleucid collection of the American Numismatic Society available for study. Special recognition is also due to Victor England and CNG, Inc., whose archives have provided many of the outstanding coin images shown here and are a model for others to follow.

For technical and editorial expertise, we thank Chris Hopkins, Andrew Houghton, Mary Lannin, and John Lavender. We also wish to give special thanks to our friend and colleague Catharine Lorber, who established, with Seleucid Coins, the model for the entries included here, and who has provided invaluable advice and commentary with respect to this project.